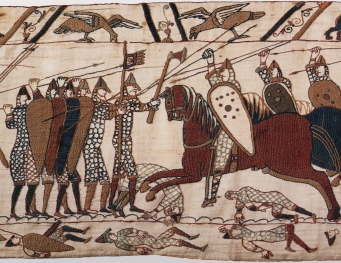 Breya’s world had been reduced to a cave barely large enough to crouch in. It was a crack in the rock, a cramped crevice into which the housecarl had thrust her to keep the rain away. It might have been a kind gesture if she were not bound at the wrists with coarse rope.

So until he decided to release her, she occupied a narrow place between the smoke seeping into the cave from the warrior’s campfire and the damp rising up through the porous rock. If Breya lifted her head, she would cough. If she laid it down to sleep, a pool of brackish water would be her pillow.

“Are you ready to let me go now?” She called.

Dark ferns stretched their slender fingers down across the mouth of the cave blocking any light from entering and preventing her from seeing without, but she knew he was there. She heard his heavy breaths and the ominous grind of a whetstone caressing the edge of his blade.

His only reply was to match a throaty grunt with a scratch of hard stone against sharp iron.

“Don’t you have a wife you should be going to?” Breya asked.

The grinding stopped, leaving her in silence. When the housecarl broke the quiet, he spoke with a tremble of amusement in his voice.

“Aye, I have a wife. The king ordered me to take one. She had-” He paused as though unsure of what to say. “She had red hair, or was it brown? She had some hair, I’m certain of that.”

The rough scrape of whetstone on blade began again. Breya thought that there must be nothing left of the sword but a hairpin after the amount of time the warrior had spent sharpening it.

“Aye. Well, I left the battle and rode north so fast I forgot to check on her. I’ll hardly set my own neck in a noose for some wench I never wanted to wed. Likely she found her way into the tent of some Norman lord, or onto the end of his sword.”

A bark of laughter shot between the ferns and into Breya’s den. She bared her teeth in silence.

“Come out of your hole, church mouse, and I’ll show you a taste of the times we’re living in.”

With a heavy weight of dread settling on Breya’s heart, she wriggled her way out of the cave. When she emerged she was surprised to find the housecarl standing on the very edge of the cliff on top of which they had camped.

She would have considered pushing him off if she had not been distracted by the sight in front of her. A ribbon of dusky red lay across the horizon beneath a thick blanket of pouring rain.

It was the glow of many thousands of fires smoldering across the landscape. Every town, village and hamlet in the north had been set alight. Here and there were dotted individual beacons of light where a barn or farmhouse was being consumed by hungry flames.

And great clouds of sparks and glowing cinders danced with the wind, yellow, orange and ruby red. It was such an awesome, beautiful sight that Breya felt delight creeping into her heart. Her whole world was being fed into the inferno, and her only thoughts were of what would come next.

“Welcome,” The housecarl bellowed into the night.” To the Kingdom of England.”

Read the first in the Saxon Story series here to find out how Breya and the housecarl met.

My historical novel is available on Amazon Kindle HERE.

One thought on “A World on Fire (short story)”