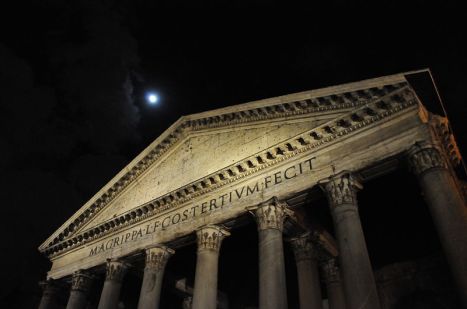 This is something I started writing a few years back as an undergraduate, so apologies in advance if it isn’t up to scratch!

A tall, well-built man passed along the edge of a cobbled street. It was a black night and the citizens of Rome were sheltering from driving winds and rain which would soak a man through in seconds.

Tall palatial villas stood on either side. Rain swept off their high roofs and was carried downwards into the blackness. A thin film of water rippled over the tops of smooth cobbles, polished by generations of pedestrian feet.

A torrent of water fell from a gutter several paces behind the burly figure. Behind this urban waterfall a dark shape dropped lightly to the street from a low wall. This swift descent was inaudible above the sound of rainwater crashing onto the pavement. The shape remained crouched motionless on the cobbles as the large man continued to press through thick sheets of cold rain.

A flash of lighting tore through the sky some way off. It was followed by a deafening roll of thunder. The man drew his cloak tighter over his broad shoulders. The cold water soaked through to his skin. The dark shape grew taller. It lifted its head and moved swiftly towards the man. It was far shorter than him and had a thin frame, but it moved with speed and a sense of purpose.

With another, closer burst of lightning the nature of the chase changed in an instant. The broad shoulders of the tall man were thrown back, and he lifted his head. As though it had never been in the street at all, the dark shape vanished behind the pillar of a temple which faced the road.

Illuminated in the centre of the street was a solitary figure. The outline of a large shield and a spear angled over his shoulder could be seen. He crossed the road slowly, casting his gaze to either side. Neither of the two moved. The man seemed to be concentrating intently on the lone soldier, undecided as to how to proceed. The smaller figure dug its nails into the hard stone of the pillar, overcome with anxiety and the desire to complete its terrible mission.

A few moments passed. As they adjusted after the sudden brightness, the three pairs of eyes in the street began to pierce the darkness again. The shadow emerged slowly from behind the pillar. Stone dust had collected under its fingernails. The unpleasant sensation was distracting. It itched to get close to the figure ahead and finish the night’s work.

A slow step away from the temple and a long thin blade was drawn out from the fold of a hooded cloak. Water ran down the polished metal as raindrops fell on its surface. The tall man’s wide frame was standing motionless beside the arched gate of a villa set back from the street. The soldier could not be seen.

Check out the latest installments of Ripper, Thrall and Wilson’s War by clicking the names.

6 thoughts on “Killer in the Shadows #1”