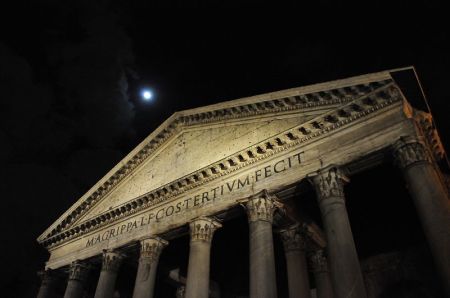 Swift, light footsteps brought Shadow gliding towards the large man. It moved along the walls lining the street, always close to cover in case it was needed. The knife was held low, ready for a fatal thrust. A blow to the leg, almost effortless when delivered at a run, could slow the man down indefinitely. It would be worthwhile to inflict as many blows as possible, to make sure that the large man never rose again. It was good luck that the soldier had not lingered for longer.

The man’s long stride once again began to carry him down the street. He moved faster than he had before. Shadow ran on, intent on its prey. The arm which carried the knife tensed. Its feet carried it closer to the space where the man had stood and watched the soldier.

The street was flanked by the villas and temples of wealthy Romans. There were no streets leading off it within view, nowhere for a patrolling soldier to move on or take refuge. So it began to wonder where he had gone.

Shadow had to stop being distracted by the soldier. It reached the space where its prey had stood, the hunt was almost over. Under the archway stood a statue, an expression of shock carved into its face. Then what sounded like another thunderclap filled Shadow’s ears.

“Halt!” The statue cried in a deafening voice.

A wide, rectangular shield shed a skin of rainwater as it was thrust forward out of the darkness. Shadow acted instinctively as its body folded downwards, turned sideways and twisted away from its attacker. Weight on its back foot, the shadow flew at the aggressor and lodged the thin blade between his ribs. There was a groan of agony and the man fell.

The soldier who had taken shelter under the archway was still and pale. It seemed to Shadow as though he had become a statue once again. But the blood which pumped through his tunic and ran down his sides to join the flow of water in the gutter was evidence that the kill had been real. Shadow realised its mistake. The soldier had lingered.

The large man now ran with heavy steps away from the scene of violence. A sharp tug revealed that the blade was stuck in its victim and all that Shadow’s efforts produced were spurts of hot blood wetting its hands. A brief moment of panic followed, then clarity once again. The soldier’s heavy short sword was retrieved and the hunt resumed.

Stealth would no longer settle the matter. Shadow would have to catch its larger prey, and then there would be a fight. The sword felt impossibly heavy compared to the knife. A blow to the back of his head would surely suffice if the man could be overtaken. If he turned to fight, however, it would have to be a matter of cutting and piercing until he fell.

Shadow was smaller and lighter. It drew closer to the larger figure with every step. But the man was strong and did not tire. The streets became narrower, small houses drew in closer on either side. The chase had brought them closer to the river. There the poorest citizens of Rome robbed, killed and sold each other to carve out a living for themselves. There would be no alarm raised so late in the River District.

A door opened onto the street, casting a warm glow of lamplight across it. The woman who staggered out of it wore a frayed green dress and her hair hung in limp curls across her face. Stumbling forward, she did not see the man. In his desperate terror he did not stop but bowled through the woman. She was hurled aside by the force of the impact, striking the hard ground with her head as she fell. The man was carried forward by his momentum, and then suddenly he fell. He had twisted his ankle in a last second attempt to avoid the collision.

Check out the latest installments of Ripper, Thrall and Wilson’s War by clicking the names.

3 thoughts on “Killer in the Shadows #2”