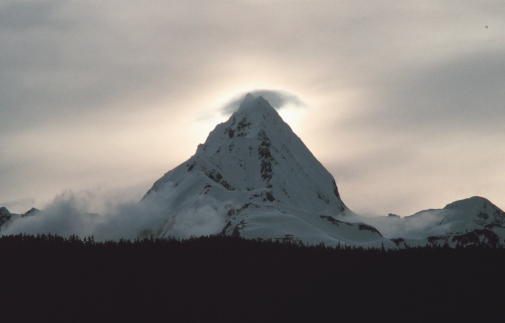 Elph led the small party up through the foothills of the great mountain. Now and again, their progress was marked by the booming cries tumbling down from the rock spire among the clouds. The sounds’ passage was followed by the cracking roar of avalanche and splintering ice.

“Dragon speak that is.” Dura said in a mysterious, gravelly voice. “Not a word of it can be understood by those unfamiliar with the tongue.”

“You mean to say someone who doesn’t speak it can’t understand it? Now there’s a surprise.” Cati, the trapper, said in tones slick with irony.

Soon they came to their first obstacle. It was where the rolling hills and meandering valleys became the mountain proper. All of a sudden the path shot upwards into the sky, a steep ridge with a near-vertical wall of stone to either side. Snow clung to the cliffs as best it could, but a single snowflake might tip the balance and send the whole crashing down to entomb unsuspecting climbers.

The group of adventures, the mercenary and his highland companions, stood in a small defile and waited to proceed. They were in a dip, a bowl of rock which allowed some shelter before the real climb began.

But the way ahead was blocked by an obstacle either natural or magical in origin, or perhaps some of both. Shards of ice whirled over the beginning of the ridge along which they meant to pass. Some were mere slivers, razors of ice, while others were thick splinters that could impale a man through. All were sharp enough to slice bone, whipped by the fierce wind into a raging torrent which could pierce the hardiest of armour.

“Here is the first gate into the fortress.” Dura said to Elph. “Which will it be, grappling hook or battering ram?”

Read the latest Killer in the Shadows or The Diplomat.