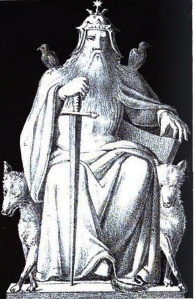 “Hail to you, hearty men and stout women, for today is Wodan’s day. Raise a cup now and drink your fill!”

Wodan remained like a statue of chipped granite as the titan bellowed his speech. He didn’t move as the giant raised a long arm formed from the twisted trunks of mighty firs. Not a sound escaped his tight lips as the giant’s fingers, each taller than a high spruce tree, overturned the hollow carcass of an ancient oak which he used as a drinking horn.

A flood of earthy, amber liquid cascaded down from its rim and swept in a foaming flood around the giant’s feet. His ankles were dry as bone, but the sour ale spun and surged around Wodan’s shoulders, threatening to tear his legs out from under him.

He braced his spear against the ground and stood fast, waiting for the deluge to subside. Voices could be heard crying out in fear beneath the forest’s shadowed boughs. Wodan heard his people’s terror and felt a sharp flint of anger strike against his hard stone heart. Wringing ale from his long, silver beard, he pointed the long shaft of his spear up at the giant. He had to squint, peering up towards the bright sky from beneath the wide, tattered brim of his black cloth hat. Did the titan feel fear, looking down into the creased lines of his face? He doubted it.

“Do you mock me, titan?” he asked, his voice a deep rumble that shook among the spindling branches of the giant’s head.

“Mockery?” the giant bellowed back, shaking the earth with his booming laughter. “I propose a toast to the mighty Wodan, but his people will not drink.”

“Is it a toast, or are you just too weak to drink with Wodan Allfather?”

“Weak? A puny god like you could not drain one cup of my ale.”

Chuckles came from the depths of the giant’s throat as he swirled the last drops around inside his vast drinking horn. A sound like a hundred cascading waterfalls met Wodan’s ears as the cup refilled. Green saplings and shoots crept out of the damp earth, twisting about the huge toes. Gnarled roots spread from the giant’s toenails and pressed into the soil.

Wodan took the cup that was offered, too huge almost for him to hold without toppling over. He drank his fill and smacked his lips, feeling the pressure of a lake of ale bulging in his gut. The giant filled it once more, draining his portion in a few gulps. While his back was turned, Wodan tapped the butt of his spear once to the ground and slid the point into his own navel.

Golden, foaming liquid burst out and streamed into the gaping chasm that had opened where his spear touched the earth. When the giant looked down at him once more, Wodan had the look of a starved man, thin and hunched. He pressed the cup back into his hands.

Their game continued for several days, while the forest-dwellers hid behind the trees and looked on in horror. Wodan’s cup was filled over and again. Each time he drank, waited for the giant to look away and emptied his belly into the dark depths of the earth. Finally, the titan began to sway. A thick copse of trees and ivy creepers had grown over his feet and up his shins, fed by the bitter ale.

“Do you admit you lack the strength to carry on?” Wodan asked.

The giant gave no reply, only teetered slightly and peered down at the old, bedraggled god. Broad hands made of gorse and holly thorns tried to swat at Wodan as he climbed up the giant’s back. But his mind was too addled to strike home, his legs caught fast in the trap. Wodan reached his neck and paused, catching his breath in haggard pants and wheezes.

“Will you admit your weakness now?” he asked.

Wodan wedged the point of his spear into the giant’s neck and he crashed to the earth, ripping apart trees and undergrowth as he fell. The people of the forest watched as their god shuffled away, clutching wrinkled hands to his gaping stomach.