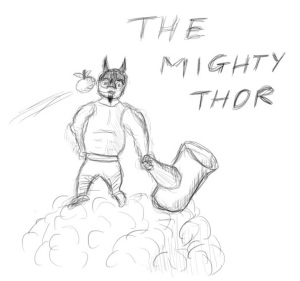 Thor’s squat little legs carried him up onto the mound of stones that spilled over the pond’s bank. He stood on top and set one hand on his hip, the other dragging his great hammer Mjolnir after him. A few steps below, his younger brother Loki squinted up at him.

“I am the mighty Thor!” he squealed, throwing back his round face so that his short yellow beard jutted out. “I am king of all the gods!”

The smaller godling tried to scramble up after his brother, but his gangling legs could not find a purchase on the smooth boulders. Loki slipped and tumbled down to land with a splash in the cold, murky waters. A shrill, ringing voice giggled somewhere out of sight. The godlings looked around for the source of the sound, but saw nothing. They heard it laugh again, louder.

He tried to bellow with rage like his father, Odin, would have, but his soft throat only produced a wheedling whine. Loki hauled his knees up by his chest and sulked, lank black hair falling across his face.

A short, green shape dashed out of the thick reeds and sprinted at the base of Thor’s mound. He hefted Mjolnir into the air and prepared to crush whichever creature was taunting him. Before he could leap into an attack, a glossy red apple struck him on the bridge of the nose. He toppled backwards off the slick stones and fell into the pond. His mighty hammer landed on Loki’s unsuspecting head and drove him underwater.

They came up together in a writhing surge of thrashing limbs, spitting long jets of water from their mouths.

“I did not. It was her.” Thor said, pointing to the creature prancing about on the spot where he had stood.

She was a girl of the same age as them, with long golden hair fixed in a tight braid down her back. Her hands each held an apple, one green and the other red. As soon as the brothers stopped their squabbling, her arms flashed forwards. Thor was lucky that time, ducking out of the way, but the red apple hit Loki’s head exactly where Mjolnir had landed and he howled with pain.

“I’m Idunn.” she trilled in reply. “I’m queen of all the little godlings!”

“You are not.” Thor cried, leaping out of the pond with his hammer raised.

Mjolnir swung through the air, continued to swing, and hit Thor on his fat backside. The little goddess had disappeared. First she had been a young girl, then she had begun to shrink until a squalling infant lay at his feet. As he stared in wonder, Idunn grew smaller and smaller until there was nothing left but two tiny pinpricks of starlight.

They drifted away across the pond, bouncing off Loki’s smarting head as they went.