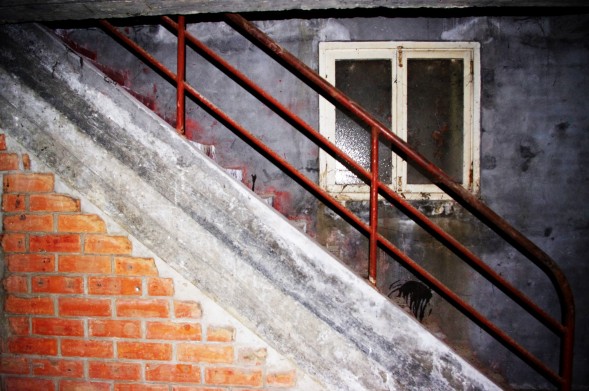 5 months since my last post. Apologies for the delay and hope to bring you something worth the wait.

There’s something in the cellar. Dane knows it’s down there. He hears it move, groan and howl in the night. It stops him sleeping. All he wants is to rest his eyes, clear his mind and dream.

Dreams. Sleep. And the moaning thing in the cellar.

Dane lives alone in the woods. Cold dark woods which stretch for miles, a sea of trees cast in black shadows. Night comes on and the moon sleeps behind the clouds, but Dane can’t sleep. He hears the rattle of chains at the bottom of the stairs. He wouldn’t mind if the thing lived outside in the dark and cold. If the beasts were all outside then he would fear the night, but the famine of sleepless, dreamless half-life wouldn’t be cutting through him like a slow, cold blade. But the beast sleeps below. It sleeps in the day. At night it howls for the slumbering moon.

His house is old, cobbled together from thick timbers with nails and saws. Rough walls. Splinters. Soot staining a black shroud around the fireplace.

Rough wood gives comfort, knowing the hands which carved each beam held him as a babe. The same arms which plied the saw rocked him in his crib. But rough wood frays rope over time as it runs across its abrasive surface. Dane’s rope was already thin as it was. Calloused hands held him as a babe. Rough arms swung his crib. Maybe they were too firm. Maybe baby Dane won a bruise, caught a fracture. His own fault. Too frail.

The rope frays and then it snaps.

Dane reels out of his narrow bed, drunk on rage and fear. The thing in the cellar groans and rattles its chains, tempting him down.

But it’s Dane who comes. He doesn’t so much charge down the stairs as he attacks them. He attacks the whole house. A final protest against its rough fostering. His shoulder collides with the doorframe hard enough to make him bite his tongue. He tastes blood and spits it out with a harsh snarl. The banister gives a crack as he rams into it. Then he’s crashing down the stairs, his bare feet pound on the steps and the whole house seems to shake around him. In the cellar, the thing screams a scream to put ice in the blood.

Dane is scared. He’s sweating and close to wetting himself with fear, if he hasn’t already, but he carries on. He’s committed now. His hand is closing round the cellar door, ready to rip it open and confront the cobwebbed darkness below. If he turns back and creeps away to his bed, he’ll never sleep in the house again.

He moves slower now, cautious of pale corpse fingers reaching over the steps to trip him on his way down. A short tumble, a broken neck and an eternity with the thing. He’s careful in spite of his fear.

An hour later, the smell of gasoline heavy in his dilated nostrils and its taste thick on his tongue, he throws a match onto the porch and watches the flames sate their hunger on the rough old timbers. There’s a sweet catharsis in it, but he feels sick to the pit of his stomach. He tries not to think about the thing he saw in the cellar. The memory wanders uninvited across his tear-soaked eyes.

A woman, no more than a girl if his memory paints an honest picture, kneels on a stained mattress in the middle of the dank cellar. Chains rattle around her scabbed, bleeding wrists. ‘No more,’ she begs. Does he listen?

He descends the stairs, shivering in a euphoria of terror. He’s never seen her like this. A little red pill dissolved in a rusty can of water keeps her asleep through the day. He fears her at night. But tonight it ends and he’ll never need to fear her again. Soon he’ll sleep and she’ll never wake.

One thought on “There’s Something in the Cellar”