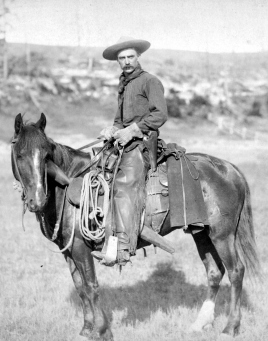 The assassin led his worn-out mule into Old Akkolade and the sheriff watched him come. He was perched up on the jailhouse roof, hanging his elbow over the crumbling brick parapet and mincing a cigar butt between his tobacco-stained teeth. The deputies lounging around him winced in the fierce sunlight and swatted blood-fattened flies from their sweating brows.

‘First thing y’all should know ’bout Kid Bonn,’ the sheriff said, keeping his eyes on the dust-whipped high street and growling to catch their attention, ‘He’s the sorta fella who don’t look much. He’s a puss to look at, but this tomcat got fangs. Y’all best remember that.’

His deputies gave a chorus of thirsty croaks to show they heard. Every one of them was too caught up in his own discomfort of dread to offer any more coherent response. They were in a collective state of corpse-like repose, hoping to put off the moment when their cracked and blistered hands would reach for the baking metal of their rifles, brought to a skillet-hot temperature by the midday sun.

Now they bobbed their heads in unison as his cool green eyes fixed them one by one. The sheriff couldn’t see their eyes, only hat brims, bristle chins and Winchesters, but he knew they wouldn’t dare meet his gaze anyway. Snake Eyes was a viper. Look him in those almost-yellow lights and you’d be hypnotised, put down for the long sleep with a lead pillow to rest on. So folks said.

The sheriff turned back towards the high street and wiped sweat from those infamous eyes. Like the rest of him, they were tired and dull. They’d seen too much to carry on. Either that or they hadn’t seen enough. Every day from crib to grave he’d spent, and was likely to spend, in a beat up dust trap called Old Akkolade. Where New Akkolade was, nobody had ever thought to tell him. In any event, he thought it was best they didn’t. New towns deserved better than a stiff-jointed, worn-out old sheriff who got lucky once and rode the wagon for the rest of his life.

At the end of a crooked dirt track bordered with rag-and-bone shrubs, high up on top of a haphazard wooden steeple, the church bell rang out in a series of hollow clangs. Out past the cracked shutters of the general goods store, he could just make out the lean figure of the Reverend charging downhill at a loping gait, steeling himself to harangue any errant members of his congregation too slow to slide down from their stools at the saloon bar. People in moth-eaten Sunday best crowded the high street, jostling their way up towards the church.

And Kid Bonn was nowhere in sight. His ambling juvenile figure, half-starved mule and oversized wide-brimmed hat had vanished. It was as if the small clouds of dust thrown up by the marching feet of the regiment of parishioners, advancing double-time to do battle with Lucifer, had swallowed the assassin whole.

Snake Eyes entertained himself with the thought for a moment, hoping the dust would spit Kid Bonn back out in some other sorry bastard’s town. But that was a child’s dream. He stood up with a crack and pop of his worn knees, pulling the brim of his hat low to shield his eyes from the glare beating down from on high.

‘We going to church shirrif?’ one of the deputies asked, hustling over to the ladder which led down into the shade of the jailhouse before a word had been said.

Snake Eyes laughed and kicked the others over to the trapdoor. ‘I ain’t got a clue ’bout where we’ll find him now, but Lord knows a devil like that ain’t going near no hallowed ground.’

He led his men down into the street and sent them on to scour the town while he stood cooking himself in the middle of the road. The place was quiet as a tomb, no rustle of skirts or hum of a tune to take his mind off the raw tension in the air. He took the folded telegram out of his shirt pocket and read over the message again.

Killed the sheriff and put one in my leg.

Laughed while he done it.

Somewhere out there, in his town, lurking in strange shadows thrown by familiar buildings, there was a man with more maggot-ridden corpses to his name than anyone could count. Somewhere someplace he couldn’t see, there was a bullet waiting for him. Snake Eyes watched his deputies come back in one by one. He heard them say the town was clear. Nothing out of place, nobody they didn’t know.

He turned his tired eyes out to the scrubland west of town and the rotten shack roosting among the weeds and vermin like a festering sore. Children whose parents didn’t mind where they went or what they did often played out there, he knew. He’d never been near the place himself. His mother had been a goodly, caring woman after all.

He looked around at his deputies, catching the eye of a large young man with a swollen belly and trembling cheeks. ‘Who lives out there, deputy? D’you know?’

‘Yes.’ The fat deputy stared blankly at the sheriff’s boots until a pointed cough brought his thoughts forward a step. ‘Gramma Bonn I believe.’

Snake Eyes let out a long sigh and a curse. ‘So you boys reckoned if I didn’t catch on ’bout this, y’all wouldn’t need to stretch them hands of yours to raise a rifle?’

‘Ain’t stretching hands we was worrying on,’ he said, shuffling his feet. ‘We was more concerned on account of catching lead. Gramma Bonn never liked us much and we don’t like how you said Kid got fangs and such.’

Gramma Bonn… I wonder what kind of child she had who coughed up that devil.

There was no track leading up to the old shack, just scuffed patches of earth where the mule had scratched for roots on its way out. They lost sight of Gramma Bonn’s mean dwelling as they left town and it sank behind a rise in the patchy earth. It sprang up again as they drew nearer. What would once have been a passable home had fallen past the point of disrepair. Boards criss-crossed at crazy angles, pushing the tin roof up in places and letting it sag down in others.

‘Spread out round and watch them doors and windows,’ the sheriff said, pulling his pistol free from its holster and feeling the uncomfortable weight drag at his wrist.

The deputies sidled down either side of the shack, shouldering their rifles. Snake Eyes went up to the door, hearing the wooden boards of the porch creak and groan underfoot. It was like the moans of dying men. Try as he might, he couldn’t keep black thoughts from flooding his imagination. Something crackled beyond the door and in his mind’s eye he saw yellow bones being ground to dust in a great hellhound’s jaws.

Pull yourself together, he chided himself. Are you scared of a boy with a toy gun?

He rapped his knuckles on the door and called in. ‘If there’s anybody in there y’all better holler out. We’ve got this place covered on all sides.’

There was no sound from within. Nothing save what could have been a murmur of talk or a whisper of air under the door. He hammered on the door again with the butt of his gun and shouted louder. ‘Y’all better holler if you’re in there!’

He took the latch in one hand and threw the door open, lunging inside with the barrel of his revolver leading the way. A rush of stale air came at him. Woodsmoke, stale sweat and urine. It took a while for his eyes to adjust to the gloom. A fire blazed in the stove set against the far wall, sending an orange glow sprawling out over the thick carpet of dust on the decayed floor.

Two large barrels stood on their ends in the middle of the room. A pair of hunched creatures sat on them, playing cards clutched in their shrivelled hands. Neither looked up as the sheriff stood over them, the sides of their faces nearest him wreathed in shadows.

He couldn’t tell them apart at first. Then his eyes began to pick out details through the cobwebs of shadow. The decrepit gargoyle on his right had the smooth, round cheeks of a child with a flush of ruddy youth spread over them. Greasy black hair hung in curling locks over his forehead and his tight waistcoat didn’t hide the slight bulge of his belly.

Gramma Bonn’s face seemed to have melted in the glow of the fire, drooping wrinkled skin hanging down under her eyes over pinched cheeks. Long white hairs sprouted from her sagging chin and grew in patches across her spotted scalp.

Snake Eyes trained his pistol on the boy and spoke through gritted teeth. ‘On your feet, Kid.’

‘Got any sixes?’ Kid Bonn asked, not raising his eyes from the cards in his hand.

His grandmother let out a wild cackle. ‘Go fish!’

The sheriff thumbed back the hammer of his revolver as Kid Bonn reached to take a card from the deck. Something about the two shrunken people turned his stomach. He wanted to put a bullet in the boy’s head and have done with it. His finger trembled over the trigger as he fought to pull it home. Nothing happened. His hands, arms and legs all felt as heavy and immobile as granite. His throat was frozen closed and, try as he might, he couldn’t speak a word.

‘Yee!’ Kid Bonn crowed, pulling a few cards from his hand and throwing them down. ‘Four threes. How ’bout that, you old hag?’

‘You’re a bully, that’s what you are.’ Gramma Bonn whined. ‘Why you playing ’round with this here fine lawman? Didn’t I teach you better than that?’

‘Naw gramma. I ain’t gonna play with him long. Anyhow, you ain’t got cause to complain. You’re a cheat and don’t think I don’t know it.’

As he spoke, Kid Bonn rose from his barrel stool and pulled a pistol from the waistband of his trousers. Snake Eyes had never seen a heavier looking piece of iron in his life. The gaping black eye of the muzzle swung round to face him and spat fire. There was a deafening blast and the sheriff felt hot air rush past his face. Something heavy hit the ground outside.

Kid Bonn pivoted on the balls of his feet and fired another shot through the wall, turned again and blew a hole in the backdoor, turned a final time and shot out the side window. Snake Eyes waited for his deputies to return fire. He stood frozen in place and strained his ears in expectation of the clatter of rifle fire. It didn’t come.

‘You’re a bully,’ was her only response.

They’re dead. The word went off like a cannon in the sheriff’s mind. He’s killed them all and he never even set eyes on them. Devil.

His finger trembled, twitched and snatched at the trigger. The pistol went off once and he kept firing shot after shot until the hammer snapped down on an empty chamber. He fumbled for a bullet from his belt and slotted it into the pistol as Kid Bonn stumbled back. Dark stains were spreading down his waistcoat, but he didn’t look afraid or mournful. His mouth was pursed in a whistle of surprise. Gramma Bonn set up her cackle of glee again as his head went into the stove and flames engulfed his body.

Snake Eyes pressed the barrel of his gun to Gramma Bonn’s temple and pulled the trigger, weeping in confused terror as blood sprayed across the room and he scrambled out through the open door.